Blayne Reed, Extension Agent IPM, has just published an excellent article on considerations for planting corn or sorghum in ground treated with yellow herbicides in anticipation of cotton planting.

The full article is here: http://halecountyipm.blogspot.com/2015/05/planting-sorghum-or-corn-in-yellowed.html

Here is the first paragraph:

It is no secret that we have had a devil of a time with weed control these past few seasons.  In response we have been getting better and more aggressive in our use of pre-plant herbicides in our primary row crop, cotton.  This is making for an interesting dilemma with such a long (yet welcome) period of wet weather delaying most cotton plantings.  Any more delays in cotton planting and many of us will be outside our window for our full potential of profitable cotton crop.  This leads many of us to consider alternate crops that do not require as large a production window such as corn or sorghum planted slightly later.  So, what can we do about our fields that were aggressively treated with pre-plant residual cotton herbicides?

Corn or Sorghum in Place of Cotton in 2015: Insect Considerations

Some cotton growers are considering planting corn or sorghum if they can’t get all of the cotton acres planted by the insurance cutoff date. This article is meant to provide a few insect considerations when thinking about corn and sorghum. Dr. Dana Porter, Ag Irrigation Engineer at Lubbock, is preparing an article on irrigation considerations for release here in a few days.

The three biggest pest threats to late-planted corn on the southern High Plains are fall armyworms, spider mites and mycotoxins (which are affected by fall armyworm and corn earworm).

Any corn planted in June is considered to be “late corn” from an insect perspective. There is still time to reach maturity with some of the less-than-full-season hybrids, so by late I mean only as applied to insects. The first and perhaps most important suggestion is to plant a good Bt hybrid; fall armyworm numbers increase as the season progresses and this insect can cause significant yield loss to non-Bt corn and Bt corn that does not have at least two toxins in it. There are very good hybrids available with two or more toxins and a list can be found here: http://www.texasinsects.org/uploads/4/9/3/0/49304017/traittable2015april6south.pdf). Your seed dealer will be able to make specific hybrid recommendations. I would avoid one toxin corn (Herculex and Yieldgard) because it won’t stand up well to high fall armyworm numbers. Here are my rankings for the efficacy of Bt hybrid types against corn earworm and fall armyworm:

Fall armyworm is a major threat. How bad can it be? Our research at Lubbock has shown an average of 0.2 pounds of yield loss per ear when fall armyworm punctures the side of an ear and feeds on kernels. The losses come both from direct ear feeding and from the fungi that come along with the insects and through the wounds they cause. In or trials 52% of the yield loss was from fungi and 48% was from direct kernel damage by the insect. These same research trials showed drastically higher levels of mycotoxins in ears with side puncture FAW damage than ears with only tip damage. Fall armyworm larvae can also damage the ear shank and cause ears to drop to the ground.

Pay particular attention to the Bt corn refuge planting. All Bt corn with two or more toxins planted in the “cotton zone” (basically south of Amarillo) is supposed to have a 20% non-Bt block planted in the field or in a closely adjacent field. Strip refuges of four or more rows are also allowed. Single toxin corn is supposed to have a 50% refuge. Even though our recent research makes us confident that strip refuges have less fall armyworm damage than block refuges (from the toxic Bt pollen falling in the strips and creating toxic kernels), this protection is adequate with only low to moderate populations of fall armyworm. Late planted corn should expect heavier populations of fall armyworm, so a refuge, if it is to be planted, should be a block refuge that can be sprayed if things get bad. Also, even though seed blends are not supposed to be planted in the “cotton zone”, some fields are planted to seed blends. None of the non-Bt seed in a seed blend counts toward refuge in the cotton zone, so a correct refuge, if it is planted, should be calculated as if there was no refuge seed in the seed blend.

The next threat, and one that is always present whether corn is Bt or not, is spider mites. Bt corn has no effect on spider mites. Mites can be a very serious problem and occasionally require more than one miticide application. The good news is that late-planted corn is somewhat less prone to reaching the economic threshold for spider mites than is corn planted earlier in the season. Late planted corn should still be scouted, but the spider mite threat is somewhat lower.

Mycotoxins are the next worry in corn. Research has shown that corn growing under too much drought stress is prone to developing high aflatoxin levels, and corn grown with too much water is prone to developing high fumonisin levels. The relationship between water stress and mycotoxins levels is not well understood. There is an insect component, too, because the insects wound the ears and allow points of entry for the fungi that make mycotoxins. If you are going to plant corn then be certain you have enough irrigation capacity to keep it around at least 75% ET during peak water demand; silking through grain fill. Mycotoxins at levels beyond the Federal standards can either cause a dock at the elevator or make the crop unmarketable. Dr. Dana Porter will write about irrigating corn later in the week.

Sorghum is an excellent crop for late planting and the biggest worry being voiced this year is sugarcane aphid. It is true that we have been surprised how quickly the sugarcane aphid moved north 2015, and it is possible it will be an early to mid-season arrival on the southern High Plains this year. (Last year we dealt with it as a late season problem.) However, we have two excellent insecticides to control the aphid and we have solid economic thresholds. If the aphid arrives early to mid-season then it is likely that 2-3 applications will be needed. If it arrives later, say in August, then one application might be sufficient if any treatment is needed at all. There are sorghum hybrids resistant to sugarcane aphid, but the resistance is not all that strong and these fields should be monitored as if they were planted to  susceptible hybrids. The resistant hybrids are Sorghum Partners (Chromatin): SP6929, KS310, NK5418, and K73-J6; Monsanto: DKS37-07 and Pulsar; and Pioneer: 83P56. The sugarcane aphid is not a reason to avoid planting sorghum on the southern High Plains; it is manageable. Statewide sugarcane aphid news can be found here: http://txscan.blogspot.com .

Sorghum planted in June has a higher chance of needing sorghum midge control than earlier planted sorghum. While pyrethroids are often used for midge control, it should be noted that they can drastically enhance the risk from sugarcane aphid by removing the biological control agents from the field. Non-pyethroid insecticides should be used, and this is also the case if headworms need to be controlled. These complexities are explained in three videos posted here: http://www.texasinsects.org/sorghum-videos.html .
Posted by Pat Porter at 8:44:00 PM

President Obama has established a task force to save the honeybees. A White House Blog entry on May 19th announced, "New Steps to Promote Pollinator Health", and this was quickly picked up by the National Media - with varying interpretations of the issues affecting bee health. It is accepted that honeybee decline is a complex issue that involves factors such as varroa mites, pathogens, stress on bees due to movement of hives, neonicotinoid insecticides and other things. So I was surprised to read the first sentence in the Wall Street Journal article today, "The White House is backing efforts to scrutinize the link between pesticides and a dramatic increase in honeybee deaths." (Full article, subscription required.)

Within two hours of the White House blog post, EPA sent an e-mail providing much more detail. Given that there will be widespread press coverage of the pollinator health issue I thought it might be a good idea to provide links to factual information. The following links were provided in the EPA e-mail this morning:

I am not a honeybee expert and am not qualified to render an opinion on the factors involved in honeybee decline. Research studies are showing both harmful and benign effects of neonicotinoid seed treatments on honeybees. I have entomologist friends whom I respect as excellent and sincere scientists who have published papers with conclusions that come down on opposite sides of the issue. And then there is the middle: A recent paper published by Dr. Galen Dively at the University of Maryland found little to no effect of imidacloprid at realistic field doses. The pull quote from the article is, "Everyone is pointing the finger at these insecticides. If you pull up a search on the Internet, that’s practically all anyone is talking about,” said Galen Dively, emeritus professor of entomology at UMD and lead author of the study. “This paper says no, it’s not the sole cause. It contributes, but there is a bigger picture.” Here is a link to the University of Maryland webpage, and the scientific article can be accessed from this page.

I have worked with (and against) EPA for many years, and one thing I know is that their scientists pay attention to scientific research and forward proposals based on science. What happens at the administrative levels of EPA is another matter, and that is where the pressures from interests groups come in to play. EPA tries to make decisions based on science and often succeeds in that effort, but obviously not always.

Honeybee decline is acknowledged to be a multi-faceted problem. In spite of the temptation to jump in and blame or exonerate neonicotinoids, it is really time to wait for more research results to accumulate; complicated problems often take a while to sort out.

Fall armyworm trap captures for the last two weeks are averaging around 10 times normal for this time of year. 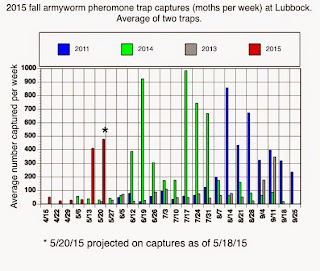 Normal captures would be in the range of 40 - 50 but we are now seeing weekly captures over 400, and this has been sustained for two weeks. I am not sure what this means in practical terms, but the moths are laying eggs somewhere. Potential early season crop hosts include alfalfa, wheat, grapes, strawberries and some vegetables. Other hosts include several of our weed species.

The abundant rainfall has meant no shortage of early season hosts for these insects and it is looking like it might be a "wormy" year in our row crops.
Posted by Pat Porter at 11:10:00 AM