It has been 20 years since Bt corn and cotton were put on the market, and we are now seeing signs that some of the Cry toxins in Bt crops are less effective than they once were. It is certain that fall armyworm is resistant to Cry1F in parts of the country (but not known to be resistant on the High Plains), and corn earworm/cotton bollworm is showing elevated levels of tolerance to several of the toxins in Bt cotton and corn. I want to make it perfectly clear that I am not suggesting we have resistance on the High Plains, but, given what is happening elsewhere in the country, I am saying that it would be prudent to begin watching our fields for elevated levels of damage from fall armyworm, corn earworm/cotton bollworm, southwestern corn borer and western bean cutworm. (This also goes for corn rootworm that is known to be resistant to at least one toxin in Bt corn.)

On top of this we have the old world bollworm, Helicoverpa armigera, knocking on the southern door of the U.S.A., and it may bring with it resistance to some Bt toxins. This species is indistinguishable from our domestic corn earworm/cotton bollworm, except by dissection of the adults. The Texas A&M University Department of Entomology and the AgriLife Extension Service have rapid sampling teams ready to collect from fields that might have H. armigera.

This post is a request for growers and consultants to report any signs of higher than normal damage to  corn and cotton regardless of whether they have Bt or not, but especially if they have Bt. We can visit a field and determine whether the damage is within the bounds of "normal" and, if not, we can collect insects for resistance and/or H. armigera screening. My office phone number is (806) 746-6101. Pat Porter.
Posted by Pat Porter at 7:30:00 PM

As we begin the summer season there are not any significant pest problems to report in corn and sorghum. Blayne Reed has reported treatable thrips levels on cotton in some fields in Hale and Swisher counties, and Katelyn Kowles is reporting lower levels in fields in Lubbock and Crosby counties. Regardless of the reports, all cotton should be scouted for thrips through the 5th true leaf stage.

Foremost in our thoughts is when sugarcane aphid will colonize sorghum. We know the insect overwintered in Hale County and near Lamesa, and we found it on Johnsongrass in Lubbock County on May 3rd, but as yet it has not appeared on sorghum. The beneficial insect activity in wheat was higher than average this year (due to higher aphid numbers in wheat), and it is possible these beneficials found some or most of the early aphid colonies on Johnsongrass and provided suppression. However, the Hill Country and areas south of the High Plains do have aphids in significant numbers, and it is reasonable to expect winged aphids to arrive soon. Last year the first find of sugarcane aphids on the High Plains was in Lubbock County on June 27th. So for sugarcane aphids we are in a period of watching and waiting. When it does arrive we will begin the several control and economic threshold trials that we have pending.

Things are quiet in corn and the only real insect of note has been fall armyworm on non-Bt corn. The most recent trap counts are pictured below. I have not heard of any non-Bt fields with an economically important fall armyworm infestation. Hopefully all late planted corn is with a good Bt trait to blunt the high numbers of fall armyworms we traditionally have later in the season. 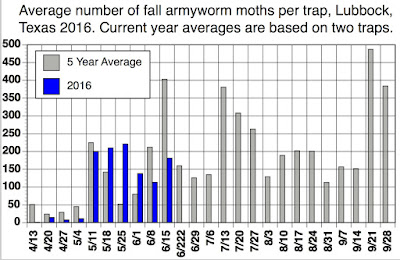 Because most of our corn is rotated, the risk of corn rootworm is nonexistent in these fields. The few non-rotated fields may be getting root injury at this time.

It has been a very stop and go spring planting season for cotton in the Southern High Plains of Texas.  Here we are again, waiting for rain to end so we can resume cotton planting. From Plainview north, an area consisting of our usually more calendar date conscientious producers, about 70% of the cotton has been planted while only about 50% South of Plainview. Rainfall this week has added much needed topsoil moisture helping dryland fields greatly and planting conditions in general.  Cotton planting should continue through early June as fields dry out on many dryland acres from Lubbock south.

For these “late” planted cotton fields we can generally state that early planted cotton can receive higher thrips pressure than later planted cotton. This is usually due to timing, or should we say the timing of area wheat drying down and becoming an unfavorable host for thrips as compared to the availability of favorable host plants to choose from.  Many early and mid-May planted fields often find themselves as an only acceptable host plant for these hungry thrips moving from the drying wheat.  Meanwhile, later planted fields generally have more acceptable host plants for the thrips to choose from, if they are still moving from wheat by the time the young plants would be at risk to thrips damage.  This year, having quite a bit of later planted cotton could affect thrips field pressure and so the strategies to control thrips. 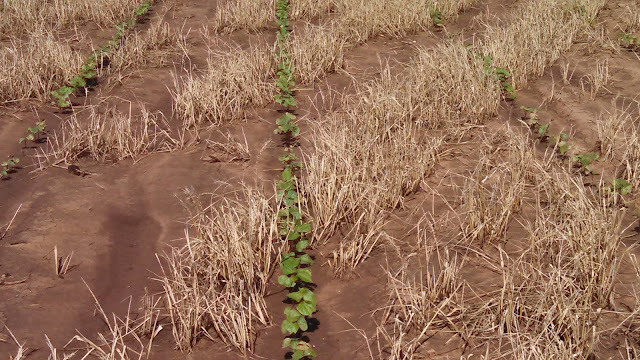 Insect pressure can vary by year and by the field, so insecticide application should be based on scouting observations made in each field, and not by a pre-determined schedule or even spray convenience. Cotton that has emerged is now at risk for thrips damage. We should now be checking fields regularly, prepared to apply foliar insecticide at first leaf as needed. Adult thrips take flight on breezes and winds from drying wheat and move onto young plants as soon as they spot the tender and vigorously growing young plants. They feed on the lower surface of cotyledons first or any exposed true leaves before moving to the very tender terminal bud or growing point of developing seedlings. When feeding, thrips unleash their unique piercing-sucking (once referred to as rasping-sucking) mount parts stab and rasp away at plant surfaces causing sever scaring while they suck up the sweet plant juices as the plant “bleeds.”

Controlling thrips at an early stage is very important as we try to protect these young and rapidly developing plants from damage.   Excessive amounts of damage to these first leaves or growing point can have a huge impact on how the plant develops later and ultimately performs. Preventive insecticidal seed treatments or some of the still available seed box treatments provide control up to 3 weeks after planting. However, this can vary.  Cooler temperature can also slow down plant growth and expose plants to severe thrips injury for longer periods of time. Environmental conditions can also affect the uptake of systemic insecticide applied on seed. Fields should be scouted on a regular basis even during any suspected residual period from preventive insecticidal thrips treatment.  One sure sign that seed treatments are losing residual and performance is the presence of immature thrips on young cotton plants.

Once the plant reaches the 3 to 4 true leaf stage, with a healthy growing point and true leaves, growth accelerates rapidly and the risk of thrips damage can start to decrease. However, the plants will need to reach pinhead-square stage before they are truly past economic thrips damage.  During the plant’s early growth stages, growers should apply foliar insecticide at a threshold level of 1thrips per true leaf stage. When scouting for thrips, there is truly no substitute for whole plant inspections from a representative sample from across the whole field.  For these inspections, we recommend looking both the upper and lower surfaces of the leaves over and then opening the tender folds of the growing and developing tissue of the terminal with a small knife of pen and looking for thrips adults and larvae there.  While scouting we will need to keep a careful count of number of thrips total, plants counted, and average true leaf stage of the field to calculate the actual thrips pressure and population in that field in terms of thrips per true leaf stage.

Mixing insecticidal treatments for thrips control with herbicide applications has proven highly effective however; we should not wait to tank mix if the field is experiencing economic loss due to thrips damage. The importance of field scouting for thrips cannot be overstated.  We strongly feel that the best thing growers can put on their crop is their shadow. We recommend scouting thoroughly across the field at least weekly with representative samples and more often if the emerged field is adjacent to wheat in the process of drying down and to make prompt thrips applications as economically needed.