Assessing the Value of Bt Corn When Insects Are Resistant - Part I: Corn Rootworm

We are entering a time when insects have become resistant to many of the Bt toxins in our GMO corn and cotton. This is the first in a series of articles where I will discuss what this might mean in terms of crop damage and the value of the Bt technologies.

To start the series, I want to make it clear that Bt crops are more than just insect protection; they are herbicide tolerance, cold tolerance, and improved genetics for yield, drought and disease tolerance. These other virtues remain even when the insect control fails, although reduced insect control clearly can affect some of them, like yield potential and drought tolerance.

Back in the early days of Bt crops, seed companies defined and charged a "technology fee" that was added to seed cost; growers knew what they were paying for insect protection. Those days are long gone, for various reasons, and now the seed cost is what it is and there is no way to know how much is being paid for the Bt traits.

While we don't know the cost of the Bt component in seed, we can approximate the value under significant pest pressure. The situation is perhaps the most straightforward in corn rootworm where the larvae prune roots, reduce water and nutrient uptake, cause plant lodging, reduce plant biomass and direct grain yield and put pollination at risk through silk clipping.

For corn rootworm, the commonly accepted approximation (in the Midwest) is that for each node of roots pruned there will be a 15% yield loss. Two nodes of root pruning in a 200 bushel field would equate to 60 bushels, or $216 at $3.60 corn. This dollar loss figure does not reflect harvest difficulties due to plant lodging. Direct bushel loss is likely to be significantly higher here on the High Plains where we often grow corn under more severe water deficit. (To my knowledge there are no similar regional studies on silage corn.)

The photo below was taken this week near Hart, TX and shows two hybrids in the same family from the same seed company. The plant on the left had no Bt toxin effective against corn rootworm. The plant on the right had mCry3a, the toxin we believe is now compromised. The root masses on the mCry3a plants are mostly regrowth; the primary roots were heavily damaged and would have rated about a 2.0 on the formal 0-3 corn rootworm injury scale. The plant without any Bt would rate a 3.0, the maximum damage possible. (Corn in this field had plenty of water to promote root regrowth; it was irrigated with subsurface drip.) 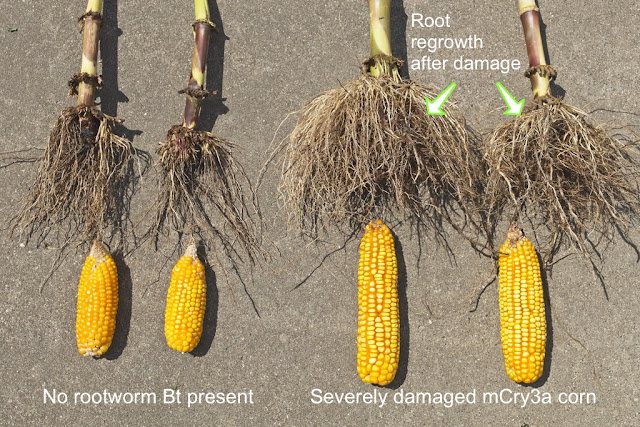 Clearly the failing Bt toxin provided some value. Had there been some Cry34/35 corn in this trial there would have been corn with relatively little damage and we could assess the yield loss experienced due to mCry3a failure.

Diminished value is still value, but certainly not full value. Planting mCry3a corn next year in fields where mCry3a failed this year is going to result in significant value reduction, probably even greater than in 2018 because a higher percentage of the population will be resistant next year. In this case, if mCry3a must be planted again, a soil applied insecticide is necessary to provide some protection. The protection will not be as good as when the Bt was working well, but the benefits of the added insecticide will be significant.

Planting a corn hybrid with the Cry34/35 toxin either alone or in combination with mCry3a is a better option because the Cry34/35 is still working and the mCry3a is still kind of working.

Reduced value in Bt corn with caterpillar control is a bit more complicated and will be addressed in a future edition of this newsletter.
Posted by Pat Porter at 1:59:00 PM

It has been quite a challenging summer with our Bt crops on the Texas High Plains. This year we have seen huge numbers of corn rootworms emerging from many fields planted to mCry3a, a corn rootworm Bt toxin that has been used year after year in continuous corn. These fields had significant root pruning caused by rootworm larvae and produced a large number of adults – survivors of the toxin.

We have also seen corn earworm do significant damage to Bt corn that worked well a few years ago, and we have documented Bt cotton with unexpectedly high levels of bollworm damage and large larvae surviving the Bt toxins. In each case we collected insects from the field and sent them for laboratory assay to determine if the insects were resistant to the Bt toxins in the crops. These assays take time, but it is highly probable that in a few months we will be reporting that resistance has been confirmed in corn rootworm and corn earworm/cotton bollworm.

To help explain what is going on in nature and in the discussion of resistance, here are some relevant terms that we will be using for the next few years. These are my explanations of what are sometimes complex things, and I in no way represent these as formal definitions.

Resistance: A genetic shift in a population of insects that renders it significantly less susceptible to a toxin. Exposure to Bt toxins does not cause genetic mutation, but it does allow survival of those few insects that already have the genes to withstand the toxin. Resistance genes are fairly rare in the population when a Bt toxin is first used, but over time and repeated exposure to the toxin the genes become more and more common in the population. Ultimately, the population becomes predominately resistant with few insects being susceptible to the toxin.

Bt Toxins: Proteins toxic to insects that were originally isolated from Bacillus thuringiensis, a bacterium, that are now being produced by Bt (genetically modified) crops. The genes in the bacterium to create these proteins were transferred to the DNA of the crop plant, and the plant now produces the toxins.

Allele/Gene: A gene is composed of two alleles, one contributed by the male parent and one contributed by the female parent. An analogy would be a zipper; one half (one allele) contributed by the female and one half (the other allele) by the male. An insect that has two alleles for susceptibility is called homozygous susceptible. An insect that has one allele for resistance and one allele for susceptibility is called heterozygous resistant, and an insect that has both alleles coding for resistance is called homozygous resistant. Genes code for various proteins and biological functions in the body. Insects have co-evolved with plants for thousands of years and already have a wide variation in genes to survive toxins present in plants and the environment.

Unexpected Injury (UXI) or Unexpected Damage (UXD): Significant insect injury to a crop that was not anticipated. Industry uses the term Unexpected Damage (UXD), but this is incorrect according to entomological definitions. Unexpected Injury (UXI) is the correct term and the one used by Entomologists. (By definition, injury is the level of harm or destruction to the plant from a pest; damage is the monetary loss to the crop due to insect injury.) Field investigations of UXI will look at a host of factors that might explain the high level of insect damage but, when these are ruled out and the damage is high enough, the field will become a Performance Inquiry.

Performance Inquiry (PI): A term with regulatory implications that defines UXI that meets or exceeds thresholds of injury and warrants insects to be collected from the field for laboratory analysis and the field failure to be reported to EPA. For caterpillar pests, some seed companies have pre-determined levels of UXI that will trigger a Performance Inquiry and force a collection of insects from the field. Other seed companies do not have any formal definitions of damage that will trigger a PI. There are established PI levels for corn rootworms. Corn with a single Bt toxin must be considered a PI if the root damage exceeds 1.0 on the Iowa 0-3 rootworm damage scale and factors other than potential resistance have been ruled out. Corn with multiple rootworm toxins triggers a PI if the roots exceed 0.5 on the Iowa scale.

Terms of Registration: An agreement between each seed company and EPA that covers, in part, how and where each Bt toxin will be planted, and what might happen if resistance is found. Refuge configurations (structured blocks, strips or seed blends (refuge in the bag)) are specified in the terms of registration.

Regulatory Definition of Resistance: From a regulatory standpoint, the word resistance should only be used after a population suspected to be resistant has been collected from the field, reared in a laboratory, and the survival of its offspring shown in a laboratory bioassay to be significantly higher than survival of a colony that is known to be susceptible to the toxin(s). Some bioassays are conducted with artificial insect diet laced with known amounts of a Bt toxin. Other bioassays are conducted on plants expressing Bt toxins.

Mitigation: An attempt to reduce the damage caused by resistant insects. Mitigation almost always occurs in the year following UXI and is an attempt to avoid yield and financial losses that result from resistance.

Remediation: An attempt to lower the frequency of resistance alleles in a population of resistant insects. (This has never been done successfully in cases of Bt resistance in North America.)

The best publication to quickly determine the types of Bt in any commercialized corn in the US is the Handy Bt Trait Table by Dr. Chris DiFonzo at Michigan State University: https://www.texasinsects.org/bt-corn-trait-table.html.