As Crop Threats, All High Plains Fall Armyworms Are Not The Same

We all respect fall armyworm as a significant threat to High Plains corn, sorghum and cotton, and that is why we run pheromone traps to assess the potential threat during the growing season. Last year we sent some of our moths to Ashley Tessnow, a graduate student working with Dr. Greg Sword in the Dept. of Entomology at College Station. She is looking at the population genetics of fall armyworm.

She sent some of her preliminary results this week, and they were a surprise; based on just 2017 moths, we seem to have a baseline level of around 30% "rice" strain. There are two strains of fall armyworm, and the rice strain feeds on rice, Bermudagrass and Johnsongrass (but can feed on corn). The "corn" strain feeds on corn, sorghum and cotton. In another surprise, the baseline level of about 70% corn strain jumped to 93% in the late June sample when we had a sudden influx of high numbers of moths for just a few days.

I sent Ashley a draft of this text, and she wisely added the following comment. "An important caveat is that the corn versus rice strain determination is based on a single mitochondrial gene. It is possible that there could be hybridization between the moth strains that were originally pure corn and rice before beginning their migration from south Texas earlier in the year."Ashley’s more detailed genome-wide sequencing of these moths will help us know if this is occurring.

Ironically, Ashley's data arrived at the precise moment Blayne Reed, IPM Agent in Hale, Swisher and Floyd counties, and I were discussing a research trial to determine whether we could time insecticide sprays in corn based on fall armyworm pheromone trap captures. Spraying on trap captures is not a good idea in most cases, but fall armyworm eggs are difficult to scout for and the treatment window after they hatch is very short. Ashley's data told us that a) we might not know what proportion of the moths in a trap are a threat to corn, and b) the proportion that are a threat seems to vary significantly (and unpredictably) over the season. And, well, c) our assumption that High Plains fall armyworms are almost entirely corn strain is probably wrong, but that is really good to know. Suffice to say that it is not likely we can develop a treatment threshold based on trap captures. 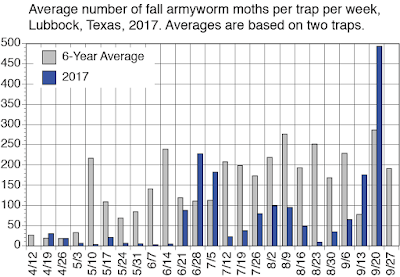