What's Up With All the Earworms in Bt Corn?

There are large numbers of corn earworm larvae in Bt corn ears in the Texas Panhandle, and some people are spraying in an attempt to control them.

The first question we are getting is what to spray, but the better question would be whether to spray. Corn earworm is usually an ear tip feeder, and on its own is seldom an economic pest of corn. However, this year we are seeing earworms doing more than just tip damage, and feeding lower in the ear. The reason(s) for this change in behavior are unknown.

We have not forgotten last year though, when there was good evidence that just a little ear tip damage resulted in higher fumonisin levels. This could happen again this year, especially if the weather in August and September turns off wet and relatively cool. However, based on what we saw last year, the little bit of tip damage needed to promote fumonisin has already been done this year, so the contribution of ear damage to in-season fumonisin levels will depend largely on the weather between now and harvest.

Corn earworm eggs are laid on silks, and the small larvae feed on silks as they move toward the tip of the ear. Silks continue to grow for several days, so new growth will not have insecticide residue on it. That is in part why sweet corn growers often spray on a three-day schedule. Once inside an ear the larvae cannot be reached with insecticides. They only leave the ear when fully grown as they move toward the soil surface to tunnel in for pupation, but by this time all of the damage is done. And these fully mature larvae don’t feed much, so they won’t get an insecticide dose except by direct contact.

There is very little benefit to trying to kill them while they are in the ear and after they finish doing damage. Corn earworm control for next year is not like western corn rootworm control. Western corn rootworm has one generation per year, and the beetles emerging in a field tend to stay in that field to lay eggs in the soil. The theory of spraying rootworm adults to control next year’s root feeding is that if most of the beetles can be killed before they lay eggs, the number of rootworm larvae the next year will be reduced. Corn earworm, however, is highly mobile has several generations, and multiple hosts to develop on. The immigrant moths come up from the south in spring and early summer, and immigration continues throughout the summer as locally reproducing populations increase as well. Corn earworm does not overwinter on the northern High Plains, so killing larvae as they leave the ear will have no effect on next year’s population. It might slightly reduce the number of moths in the next generation this year that will lay eggs in cotton (see below), but only slightly, and at significant expense.

Western bean cutworm complicates things, but its management should follow established procedures and guidelines presented on page 17 here. Western bean cutworm has been shown to be resistant to Cry1F, the only older Bt toxin that provided any significant control or suppression. Cry1F Bt corn should be scouted and treated as if it was non-Bt corn.

The second question we are getting is why all of the earworms? One answer would be that they have become resistant to most of the toxins in Bt corn. Dr. David Kerns, IPM Coordinator at College Station, has been running resistance assays on field collected populations of corn earworm (cotton bollworm) collected in central Texas and has reported significant levels of resistance to the once-partially-effective toxins Cry1Ab and Cry2Ab2. Cry1F never was very effective, and Cry1A.105 is a synthesized version of these toxins.

The bollworm/earworm populations we have on the High Plains are comprised largely of moths that flew in from south and central Texas, so it would be no surprise to find they carry alleles (genes) for resistance to the older Bt toxins. Dr. Ed Bynum, Extension Entomologist in Amarillo, will collect larvae from a Bt corn field with high numbers of larvae in the ears tomorrow and send these to Dr. Kerns for laboratory screening for resistance. John David Gonzales, Extension Agent IPM in Parmer, Bailey and Lamb counties, sent a collection of 250 larvae from a Bt problem field to Dr. Kerns this week. The laboratory screening will take a couple of months to complete and the findings will be reported here.

The third question we are being asked is what does this mean for Bt cotton which shares many of the same or similar toxins found in Bt corn.The answer is that we don’t know for sure, but we can pose a couple of scenarios.

Corn earworm (cotton bollworm) greatly prefers to lay eggs in corn rather than cotton or sorghum. When given the choice between only cotton and sorghum, it tends to prefer sorghum more. But we have relatively little sorghum in the system this year. In areas where the corn planting is spread out over time, moths emerging from earlier planted corn will seek to lay their eggs in later planted corn that is silking or somewhat past green silk. This scenario played out last year on the High Plains, and the later corn intercepted a lot of the egg laying that would otherwise have gone to cotton if the later corn was not around.

However, where much of the local corn crop is planted relatively early, there may not be later corn and sorghum available to draw the moths away from cotton. It is certainly possible in this situation that the moths emerging from corn will lay a high percentage of their eggs in cotton. If there is resistance to the Bt toxins in corn, the resulting larvae will be resistant to most of the Bt toxins in cotton.

The one Bt toxin that is still highly effective on corn earworm (cotton bollworm) and western bean cutworm is Vip3a. Corn with Vip3a will not produce many moths at all, and cotton with Vip3a will not have much damage. The “Handy Bt Trait Table for US Corn Production” makes it simple to determine the Bt toxins in any commercialized corn.

I am glad folks are paying attention to what is happening in other areas. I had a few calls regarding bollworms this week--mostly in response to the hubbub in Central and South Texas. So far, worm pressure in cotton have remained light for the most part with some areas (e.g. parts of Swisher, Floyd, and Hale counties) just starting to show increase in numbers. 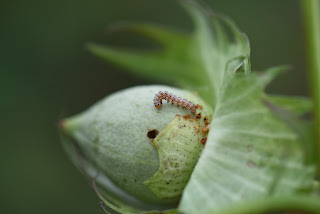 Our Bt sentinel research plots at Texas A&M AgriLife Research and Extension center in Lubbock are showing a few worms in non-Bt plots—no activity has been spotted in any of the Bt technology plots so far. As the season progresses, we may see increase in moth flights and the egg lay.

I wouldn’t spray for bollworm egg lay in West Texas cotton as very few eggs make it to worms (thanks to beneficials!). Treatment decisions should be made based on the amount of fruit injury and the presence of live worms in both Bt or non-Bt fields. Since newly hatched larvae must feed on the plant for the Bt toxin to be effective, delay decision making until you can determine the survivorship of larger worms. The threshold level before bloom is 30 percent or more damaged squares with worms present. After boll formation, the threshold is 6 percent or more damaged fruit with worms present.

Many of you are aware of the situation of worms breaking through some of the Bt traits across various cotton producing regions including the parts of Texas. We may experience similar events in the High Plains cotton if it turns out to be a heavy bollworm year. For now, let’s hope it remains a quiet one but don’t let your guard down. Irrespective of what Bt traits you have, keep scouting and be on the lookout.  Remember, once worms increase in size and dig into the lower plant canopy, it’s hard to get them even with the most effective diamide insecticides.

Neither of these populations is at a treatable level, just small colonies on isolated plants at present. If this year's infestation pattern follows those of 2014-2017, then it is likely the aphids are already present in Hale, Floyd and Lubbock counties, although we have had no reports of this as yet.
Posted by Pat Porter at 3:52:00 PM