Moths and bugs: A strange start to the season

The 2019 season is beginning on an odd note. First we had an unusually heavy flight of fall armyworms, and the larvae are easy to find in early corn and sorghum. Then this week my western bean cutworm traps began picking up large numbers of yellowstriped armyworm (YSAW) moths (70 in one night). It has been several years since I ran pheromone traps for western bean cutworm, and in the past they did not catch yellowstriped armyworm. Either the pheromone lure has changed over time, or the lures have always been partially attractive to YSAW and we just have a lot of them in the system this year. 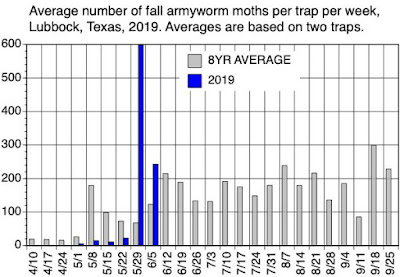 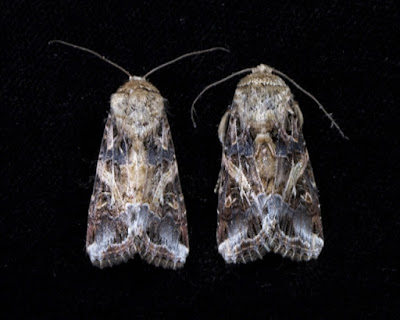 Next up we have unusually heavy populations of stink bugs. There have been several calls about Conchuela stink bugs in wheat and rye, and Dr. Ed Bynum addressed this in his newsletter earlier this week. Monti Vandiver, Syngenta, sent us a photo of some species of green stink bug at his home. We have yet to detect large numbers of these in the field. 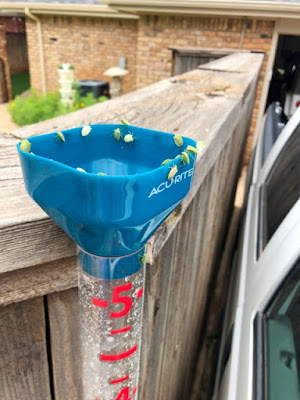 Last summer I described large numbers of western corn rootworm beetles and damage associated with their larvae in corn planted near Hart, Texas all the way up to the northern Panhandle. At that time I said we would know their resistance status to mCry3a Bt corn in June of 2019 because we had made a collection and sent it to a USDA lab for resistance bioassay. As it turns out, the field where these insects were collected did not quite reach the formal threshold to be declared "Unexpected Injury", so the seed companies involved (the company that sold the seed and the company that owns the rights to the toxin) would not authorize the resistance bioassay to be conducted. They are not obligated to do so when a field is not an official UXI, although of course it would be most useful to know whether we have resistance to mCry3a or not.

Non-rotated corn fields in the areas affected last year should be ok if planted to hybrids that contain Cry34/35. Fields planted to mCry3a (only) corn, or perhaps Cry3Bb1 (only) corn, should be closely monitored for root pruning and lodging. We expect beetle emergence from corn to begin in a couple of weeks.