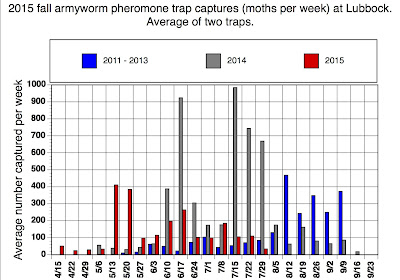 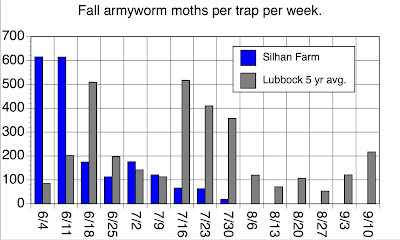 This is great news for sorghum because fall armyworm is part of the headworm complex. Corn earworm (cotton bollworm) is the other part. I don't have trap data for corn earworm, but my field sampling tells me that the numbers are around normal. Additionally, late planted corn that is entering green silk stage will draw corn earworm and fall armyworm away from sorghum. Green silk corn is highly attractive to these insects and neither of these pests can tell whether the corn on which they are laying eggs is Bt or non-Bt. In essence the late planted corn will act as a trap crop and provide partial protection for nearby sorghum. This is not necessarily bad news for corn; Bt will kill many of the caterpillars.

However, late planted non-Bt corn might be in for a rough time; it will attract these late summer fall armyworms and corn earworms. This is one of the reasons that non-Bt corn should not be planted late on the Southern High Plains, and it is one of the reasons that, in an earlier post, I hinted that late planted corn should forego the required non-Bt refuge this year. The real worry in corn is fall armyworm rather than corn earworm, and the fact that fall armyworm numbers are well below average right now is a good thing for all of the late planted corn in the area.

So, at least for right now, the indications are for a relatively light headworm year in sorghum. And this is the year we really need it! Headworm insecticide applications with the usual products could flare sugarcane aphid. (There are two headworm products that won't flare sugarcane aphids; Prevathon and Belt.) A three axis threat to sorghum; sugarcane aphid, sorghum midge and headworms, could be an expensive proposition. But at least for right now it looks like the headworm part of the equation won't amount to a serious problem in the next few weeks. Of course I don't have a crystal ball and am not going to make any assumptions about late planted sorghum; corn will not be attractive for egg laying past green silk stage and thus sorghum might get heavier infestations. But for now I will take a little good news and we will keep tabs on what happens in the next few weeks.