You can't listen to the national news without hearing stories of Zika virus, and it is proper that people exercise caution this summer. Last year's hordes of mosquitoes are still fresh in the minds of those of us who work in the field, and if the rains come again this year we will be in a similar situation. But even a few mosquitoes can be a bad thing when they have the potential to carry a serious virus. 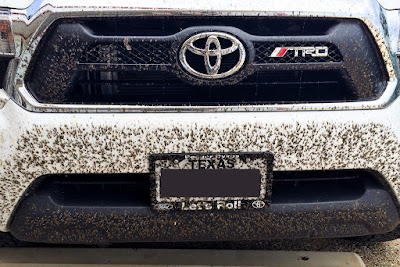 Mosquitoes on the front of a truck that left Plainview clean and arrived in Lubbock like this, spring, 2015.

The Wall Street Journal recently ran a story about US-based insect repellent manufacturers adding shifts and running factories around the clock in expectation of exceedingly high demand in the southern USA this summer. This was a week before the news broke in an article in the New England Journal of Medicine that said the geographical ranges of two known mosquito vectors of Zika, Aedes albopictus and Aedes aegypti, may be much broader than originally thought. A. aegypti may range as far north as Illinois and eastward as far as New York City. The article also said that A. albopictus ranges across the Southwest through parts of the Midwest as far north at Minneapolis, Minnesota and through most of the eastern United States including New England. The potential distribution maps from CDC are here: http://www.cdc.gov/zika/vector/index.html .
So what should we due this summer in addition to buying our mosquito repellent early? Drs. Sonja Swiger and Mike Merchant, Texas A&M University AgriLife Extension Entomologists, have just published a two page guide called Zika Virus: What Texans Need to Know. The publication came out today and is available in English and Spanish.  All of our Zika virus and mosquito control information is at a centralized location here.

The New England Journal of Medicine just published a review article on Zika (March 30th).
Posted by Pat Porter at 10:48:00 AM