I am not smart enough to be a Plant Pathologist, and in fact had two courses in it in college and still don't understand it. The classic "disease triangle" taught in pathology says that disease occurs when there is a pathogen, susceptible host and conducive environment. This year we seem to have had a happy triangle for Fusarium species, the causative agents of fumonisins.

Not much is known locally about how these fungi interact with our corn, but it is thought that drought stress followed by warm, wet weather, especially at flowering, favor the fungi. Being just an entomologist, I tend to think there is a baseline risk for significant fungal infection based on the susceptibility of the host (hybrid genetics) and environmental conditions. Without insects in the system there will be a given level of fungal growth and fumonisin creation. In my simplistic entomologist's picture, the baseline level is what it is and can vary from year to year, but insect damage can add to this level by opening wounds on the ear and/or by insects carrying fungal spores into the ear.

Figure 1. Type of ear damage and fumonisin levels associated with that damage, 2012. 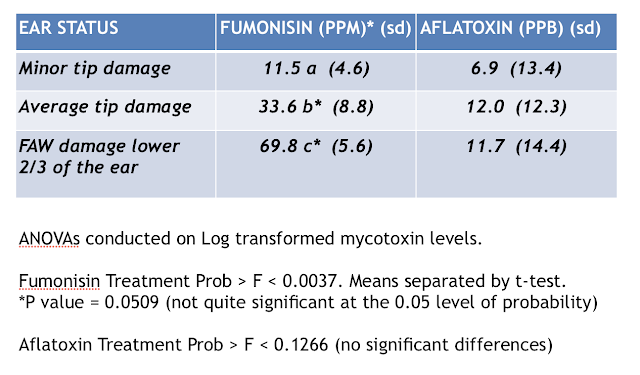 This year there is a need to try and determine to what extent insect damage might be contributing to fumonisin levels, but this is not easy to do unless the hybrids have the same genetic background (inherent susceptibility) and are grown in the same field under the same conditions. One seed company has a small plot field trial near Ralls, and they were kind enough to allow me to sample ears from their new hybrid that contains Vip3a and other toxins, and an older Bt type that has fewer toxins but still the same genetic background as the new type of corn. This is a fair comparison for determining the role of insects. The older type of Bt corn averaged 3.6 damaged kernels per ear, while the new corn with Vip3a was essentially undamaged. Even the silks on the new type of corn were intact. The photos below represent what I saw in the field today. 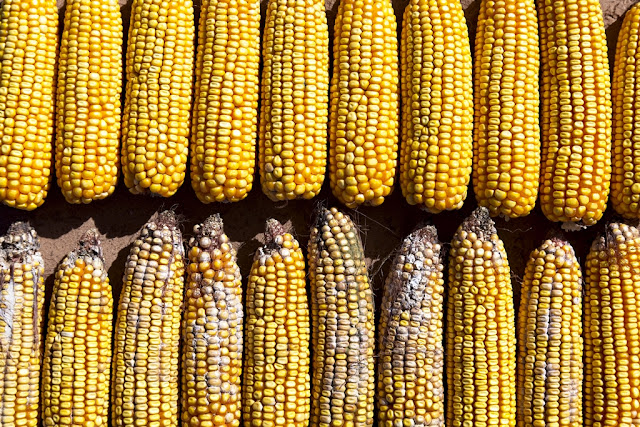 Figure 2. New hybrid with Vip3a and other toxins (top), and older Bt with two toxins (bottom). The new hybrid was essentially without insect damage. In the older hybrid the insect damage was only at the tip, but fungal growth could proceed through much of the ear. 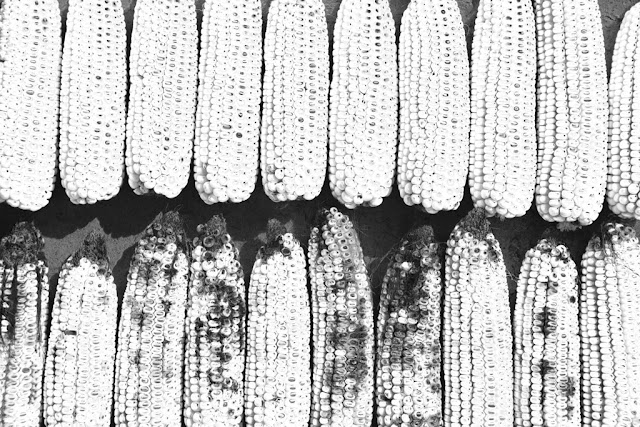 The same photo as above, but rendered in an infrared simulation that highlights the kernels damaged by fungi. The grain from these ears was sent for laboratory analysis of fumonisin content, and the relatively undamaged ears on the top of the photo had an average of 6.0 ppm fumonisin. The ears on the bottom row had an average of 208 ppm.

It is common on the High Plains for nearly every ear of corn to have corn earworm damage, and this year was no different and not significantly worse. In the opinion of this entomologist, the problems we are having this year are primarily due to environmental conditions that favored Fusarium. Having said that, I have worked with Vip3a corn for six years, and in all that time have seen only two live caterpillars in thousands of ears examined. Vip3a corn is essentially bulletproof for now, and if the goal is to reduce caterpillar damage then this type of corn is the way to go. Of course it is more expensive than older Bt technologies. All of the seed companies put other Bt toxins in with Vip3a. Pioneer sells their Vip3a corn as Optimum Leptra or AcreMax Leptra, Monsanto is now beginning commercial sales for 2018 as Trecepta, and Syngenta calls it Agrisure Viptera or Agrisure Duracade 5222. This is not to say that these hybrids won't have fumonisin problems; the inherent susceptibility might be more or less. It is to say that they will have less insect damage, which our data suggest ultimately plays a role in fumonisin levels.

Update on 10/11/17: Erin Louise Bowers did her Ph.D. dissertation on the benefits of transgenic corn in reducing fumonisin levels. She found that Cry1Ab +Vip3a corn had lower fumonisin levels that other types of Bt corn and non-Bt corn. The work is here.