It is mid-June, and I am pleased to report that there have not been any serious insect problems in corn and sorghum yet. Well, let me temper this by saying that the drought has brought plenty of problems outside the entomological realm.

Wireworms have been a problem in spotty areas, but for the most part seed treatments have kept them in check. Corn in the area is approaching V6 - V8, and sorghum is anywhere from V5 to still in the bag. Sugarcane aphids have not been detected on the High Plains, but sorghum planted relatively late will benefit from seed treatments to control sugarcane aphids, at least if prior years are a predictor. The progress of sugarcane aphid can be tracked here.

Fall armyworm trap captures just jumped up, and the weekly average exceeds the 7-year average at Lubbock. We may be at the start of a big flight; last night's capture was 124 moths per trap, whereas the nightly average for the prior six nights was only 25.4. 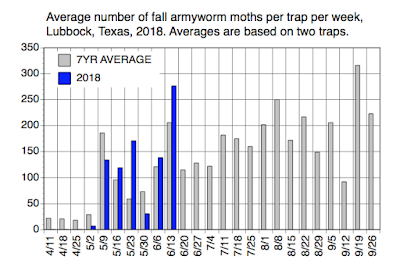 I have non-Bt heirloom dent and sweet corn planted at the Lubbock Experiment Station, and the caterpillar damage is moderate or worse depending on the variety or hybrid. (These old varieties, the ones without any insect resistance, give me an idea of the "worst case" of what is happening.) I have been monitoring modern field corn in the Lubbock area, and non-Bt hybrids have had only light to moderate fall armyworm damage for the most part. The worst I have seen had an average rating of 5 on the Davis 0-9 scale, with zero being no damage. There were pockets of plants with 7-8 damage. The Bts have been holding up and show little damage.

The good news in corn is that we still don't have any indication that our Bts are breaking down on the High Plains. In more southerly parts of Texas and elsewhere in the south, Bt corn is showing considerable susceptibility because corn earworm (cotton bollworm) has become resistant to some of the Bt toxins. However, we have no evidence that those resistance genes have made it here to any great extent. Most of our area corn is Bt, and this means that fall armyworm and corn earworm (and southwestern corn borer) will not pose a threat in the whorl stage.

In summary, things are pretty good at the moment, except for fall armyworm. Small colonies of spider mites have been found, but they have disappeared, probably due to predation by thrips coming off of wheat. We will continue to watch for the arrival of sugarcane aphids in sorghum; they hit in the third or fourth week of June the last two years and required treatment starting in mid-July, but every year is different and this year feels like they might be late.
Posted by Pat Porter at 8:39:00 AM