The 2020 version of the Handy Bt Trait Table has just been published. This two-page quick reference guide lists the Bt and herbicide packages in all US field corn in an easy to follow manner. It also lists the pests the corn claims to control and those that have developed resistance to the trait packages. This year's changes include a discussion of finding European corn borer resistance to Cry1F corn in Canada. The table also now lists Bt toxins to which corn earworm (cotton bollworm) is resistant.

But wait, there's more! The first ever version of the Handy Bt Trait Table for Sweet Corn is now available as well. There are only a few Bt combinations available in sweet corn and the new table lists them all, including those for which resistance has been determined. Basically, only Vip3a sweet corn now provides good control of corn earworm in the south. The table lists all hybrids available in the US by company, hybrid and Bt type.

The Handy Bt Trait Tables for both field corn and sweet corn can be found here: https://www.texasinsects.org/bt-corn-trait-table.html

The following graph shows the number of corn earworm larvae per 25 ears of Bt and non-Bt sweet corn grown on the Experiment Station in Lubbock in 2019. It is easy to see that the older toxins are no longer working and in fact have many more larvae than the non-Bt types. (This is because the caterpillars are resistant to the older Bt toxins and also lose the behavioral tendency to cannibalize when on the Bts.) The graph also shows that Vip3a is doing a very good job of controlling corn earworm. 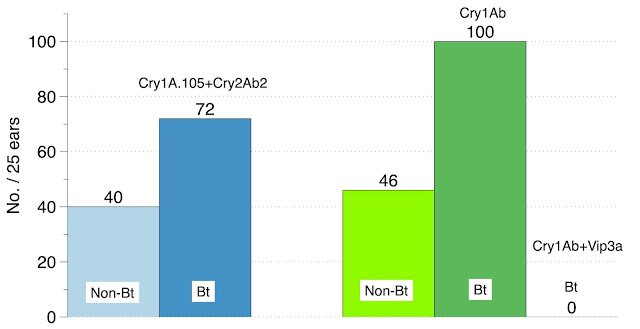