My recent post discussed the proposal by EPA to drastically change the resistance management regulations around Bt corn and cotton. You can submit a comment here before November 9th. The proposal is hard to find on the EPA website, so I have reposted it here.  Part of the plan is to phase out all single toxin Bt corn hybrids within three years, and all pyramid (multi-toxin) hybrids that do not contain Vip3a within five years.

Assuming we don't get any wonderful new technology in the next few years, this would leave southern corn growers with two choices; grow a pyramid hybrid that had Vip3a, or grow non-Bt corn. (It would also leave cotton growers with just the 3rd generation varieties containing Vip.) There are some implications for resistance management of corn earworm/cotton bollworm that are being discussed should this come to pass, like having all Bt corn and Bt cotton in the south expressing Vip, while at the same time the older toxins are failing and less able to provide any protection against resistance developing to Vip in the pyramid with older toxins. Essentially, Vip would become a single toxin because the pyramid could not protect it. The same EPA proposal is attempting to fast-track the removal of old single toxin corn hybrids because they pose a very clear danger for resistance evolution. I explained why this is so back in 2018.

Another outcome would be that corn growers would have a drastically shortened list of hybrids from which to choose. The EPA proposal simply listed the hybrids to be removed by their registration numbers, which is regulatory-speak and rather foreign to most of us. However, yesterday, Emily Unglesbee at DTN/Progressive Farmer posted an article that put common names on these corn and cotton hybrids. The title of the article is Bt on the Chopping Block, and I encourage you to read it.

Chris DiFonzo at Michigan State University is lead author of our "Handy Bt Trait Table For US Corn Production", and she has created a new table that shows what will be left for caterpillar control after the proposed phaseout. Here is a pictorial representation of the bottom line. 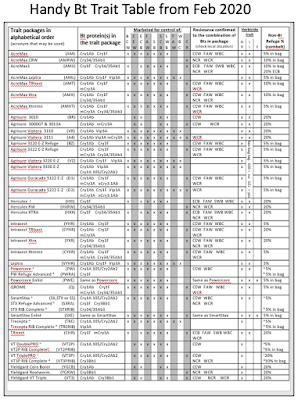